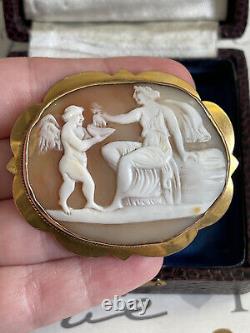 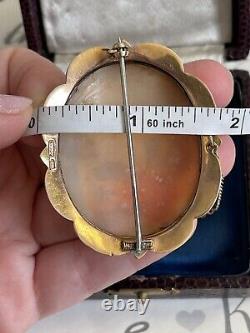 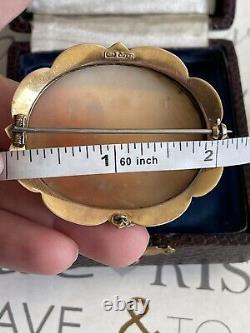 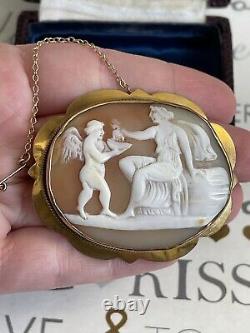 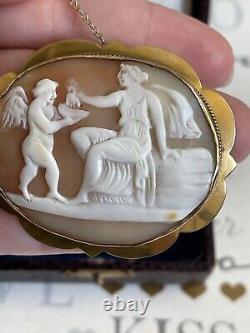 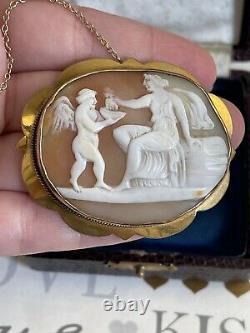 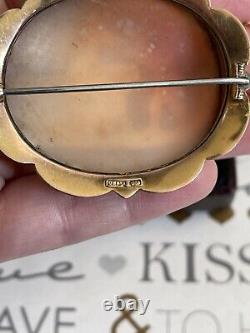 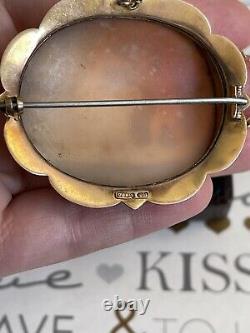 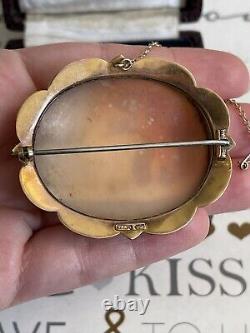 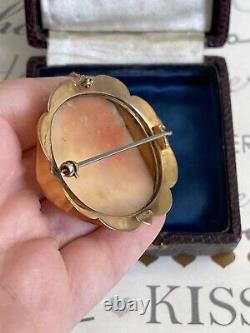 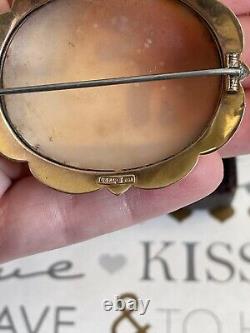 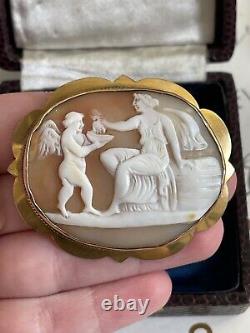 Victorian Cameo Brooch Aphrodite and Cupid 9k Gold. Beautiful ORIGINAL mid- Victorian era carved shell cameo depicting Venus (Aphrodite), goddess of love, with her young son, Cupid (Eros). This scene is also called the "Education of Eros", as Cupid or Eros appears to be taking instruction from his mother, Aphrodite. Cameo dates to 1850 - 1870, and has a 9 gold mount which is hallmarked with maker's mark. Brooch measures 2 1/4 in width by 1 3/4' in height with a high relief. With tube hinge and "c" clasp. There is a small loop on the back at the top with a very fine safety chain, indicative of "better" pieces of jewelry of the period. The carving on this brooch is really lovely! According to Hesiod in his Theogony, Eros was one of the primeval gods who, along with Chaos and Gaia (Earth), were responsible for the Creation. In other traditions he was the winged acolyte or assistant of the goddess Aphrodite, goddess of Love and Beauty. He was also sometimes regarded as the child of Aphrodite, with Ares as his father, and his brothers were Deimos (Fear), Phobos (Panic), and Harmonia (Harmony). Cameos, valued since antiquity as engraved gems, were exceedingly popular during the Georgian and Victorian periods. Many different materials were used for carving cameos. Shell was a popular medium for use in cameo carving because it was light in weight and therefore didnt limit the size of the piece. Tropical helmet shell was extensively used for its good color contrast and depth of layers. The Cassus rufus variety was white and pink, the Cassus madagascariensis had white and brown layers. The depth of the white layer in the helmut shell was sufficient to allow very high relief with lots of detail. The myriad of cameo subjects included figures and scenes from Greek and Roman history and mythology. Renaissance art, classical sculpture, famous paintings and official portraits also provided inspiration. Religious imagery included Christ, the angel of the annunciation, PAX, and the crown of thorns. Cameos were considered smart jewelry because of the intellectual nature of the subject being carved.

Tourists on "Grand Tour" holiday, viewing the full sized artworks, were delighted to take home a wearable miniature version as a remembrance. The most common cameo motif is the portrait -- and early in the 19th century, cameos started to feature an anonymous Roman woman wearing no jewelry. The figure in this cameo, Aurora or Eos is a relatively uncommon one.

The condition of a cameo is a very important point to makes it more or less valuable. Most of the antique cameos have stress lines or hairlines due to their age or often by origin. We can find lines even in the new cameos, this is a peculiarity of the shell, and then we are talking of 100 - 200 years old cameos. These stress lines or incipient cracks or very tiny chips don't have to make us worried and are normal.

The most important point is that the carving should be not worn. Always pack very carefully in new box! The item "Antique 19th 9k Gold brooch Victorian carved shell cameo Aphrodite & Cupid Rare" is in sale since Tuesday, April 13, 2021.

This item is in the category "Jewelry & Watches\Vintage & Antique Jewelry\Fine\Art Nouveau/Art Deco 1895-1935\Pins, Brooches". The seller is "vintage_everyday" and is located in Lake Forest, California. This item can be shipped to North, South, or Latin America, all countries in Europe, all countries in continental Asia, Australia.