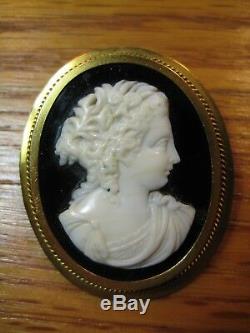 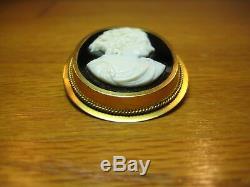 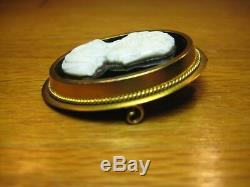 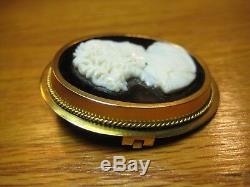 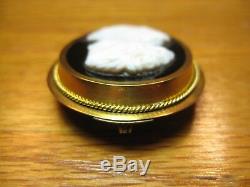 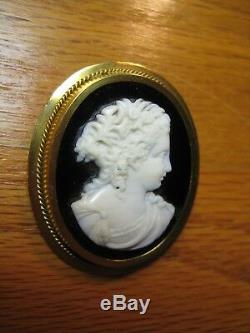 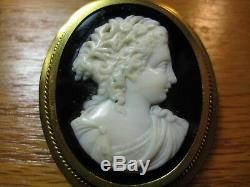 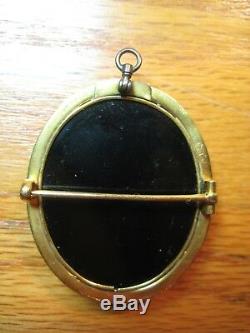 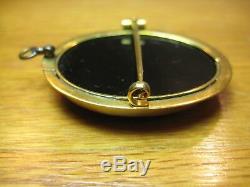 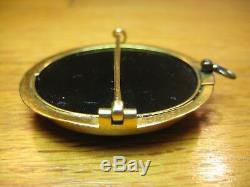 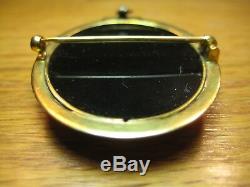 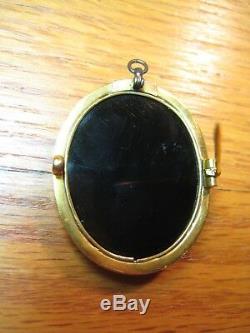 UPDATE: Below is my original posting. I've since added the information in italics that I got from another ebayer who was gracious enough to share her knowledge! I think this has some age to it.

The experts out there will probably be able to tell. I believe it to be made of black onyx? It measures approximately 1 5/8" x 1 3/8". It weighs about 15 grams. I can't find a gold hallmark on it, but it has been tested for gold.

The main gold frame and mount tests 14K. The back clasp tests 10K. I see some letters and numbers scratched onto the gold on the back (above the clasp hinge), but I can't make it out. It looks like the last four characters might be 3355 with either an R or P in front of them?

I can't actually tell if one or two characters are in front of the numbers. I have not attempted to clean or polish this piece. There are a couple of slight bends/waves to the gold backing/base. They are so slight - I had a hard time capturing them in my photos. But they are on the left side if you are facing the brooch. This is common for 14K gold pieces. They may actually could be straightened. There are light surface scratches here and there - but nothing abnormal given its age and use.

I can only see them with the eye loop and/or my extreme closeup photos. The white cameo appears to have a few tiny pieces of debris in its crevices that could be cleaned out. The clasp functions as it should. Please be sure to review my photos in detail as they're an integral part of my description.

I did take the maximum # of 12 allowed from every possible angle. What you see is what you get! I probably qualify as one of the experts out here. A really pretty piece, but was surprised to see those faint lines running across the white, because it's something you see in shell, not hardstone. So was not very surprised, when looking closely at photos taken from the side, that show the line where the figure meets the ground, to see a thin brown layer between the black & the white.

This is what was probably quite a beautiful shell cameo, but one with a very thin background layer, that suffered some trauma, or simply began to crack on its own, as they sometimes do, & someone loved her enough to have her salvaged by removing all the brown shell from around her so the figure could be affixed to the black background. Some of that haze around her may be excess glue.

It's possible the black layer is glass, it's not easy to tell, but just as likely to be black onyx. The item "Antique Victorian White Carved Cameo Black Onyx Stone 14K Gold Brooch Pendant" is in sale since Monday, December 3, 2018. This item is in the category "Jewelry & Watches\Vintage & Antique Jewelry\Fine\Unknown Period\Cameos". The seller is "keepvintagevintage" and is located in Little Rock, Arkansas.