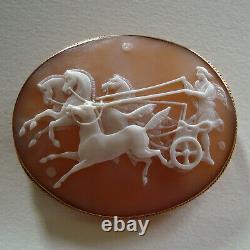 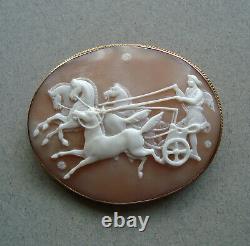 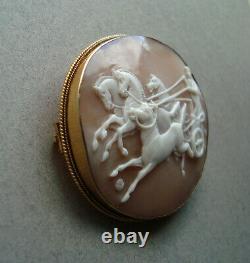 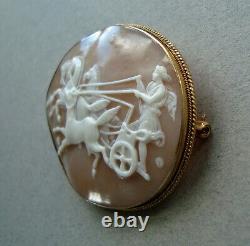 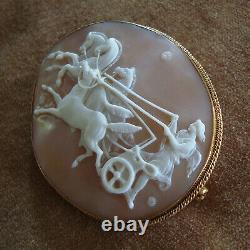 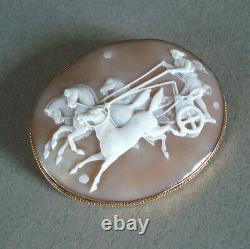 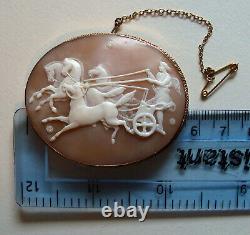 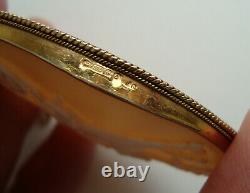 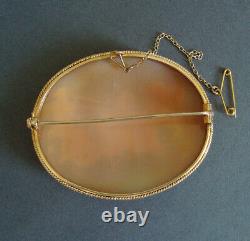 A finely carved Victorian shell cameo circa 1880 depicting Phaeton driving the chariot of his father, Helios, the sun god. According to the Greek myth Phaeton lost control of the spirited horses, angering Zeus who struck him dead with a thunderbolt, whereupon Phaeton's body fell from the skies into the river Eridaurus below. This scene is taken from a marble relief by neo-classical sculptor, John Gibson. It is likely that the renowned cameo carver, Tommaso Saulini, who knew Gibson, was the first to render the work in shell and that other cameo carvers followed suit.

The carver of this example has captured the power and grace of the horses particularly well. The cameo is set as a brooch in a later 9 carat gold mount with a gold rope trim around the edge. It fastens with a hinged pin and locking clasp and bears a full Birmingham hallmark for 1977.

It also has a safety chain attached. Condition is good for the age with slight wear to the carving and a few faint lines in the shell. The brooch measures approximately 55mm x 45mm. The item "LGE VICTORIAN CARVED SHELL CAMEO PHAETON CHARIOT HORSES IN LATER 9CT GOLD MOUNT" is in sale since Friday, June 11, 2021.

This item is in the category "Jewellery & Watches\Vintage & Antique Jewellery\Vintage Fine Jewellery\Victorian (1837-1901)". The seller is "duskybrocade" and is located in Gloucestershire. This item can be shipped worldwide.